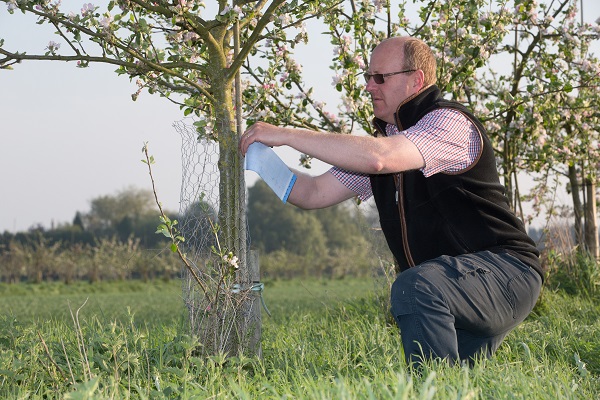 Head of IfA’s Soil and Water department, Stephen Briggs has been awarded the prestigious Nuffield Bullock Award, which was established in memory of Stephen Bullock.

The Bullock Award and its £1,000 cash prize, was presented to Steve for his pioneering work into agroforestry, where in the view of the judges, Steve demonstrated the most successful application of his Nuffield experience 10 years on.

During Steve’s Nuffield research, he travelled globally to investigate how farms operated agroforestry systems, the practice of farming trees and conventional crops alongside each other to allow, in Steve’s own words, ‘3D farming’.

Farming on Cambridgeshire fenland, soil scientist Steve realised he needed to implement radical change to stop his farm from quite literally blowing away. Steve has since established the UK’s biggest agroforestry system on his 105ha farm, planting 4,500 fruit trees alongside wheat, barley and oats.

The trees have helped boost conventional crop performance, creating better drainage in winter and helping to retain moisture in the summer, and have also increased biodiversity.

Stephen has also set up the European Agroforestry Federation, to promote the practice in Europe and (successfully) lobby the EU to remove the limit of 50 trees a hectare for land to qualify for CAP funding.

Keen to connect with consumers and educate the public, three years ago he built a farm shop, café and education centre. That £250,000 investment has produced a business employing 11 people and generating an annual turnover of £400,000.

Steve has also presented to government ministers, working as a steering group member for both Defra’s Environmental Land Management programme and the Sustainable Soil Alliance, and advising Natural England, the Forestry Commission and the Committee on Climate Change.

Since 2014 Steve has been head of the soil and water department at Innovation for Agriculture, where he is currently developing the Basis soil and water qualification and is also producing a series of online soil training tutorials.

Once again congratulations Steve and a huge well done to all the nominees.

Get our newsletter - keep up to date